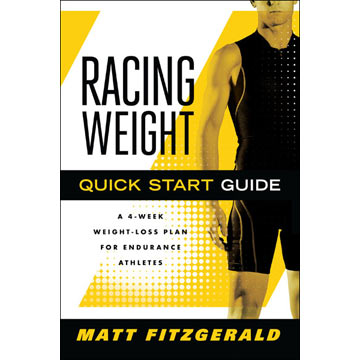 If you’re like most endurance athletes, you’re concerned about your weight. You know that every extra pound slows you down. Matt Fitzgerald’s Racing Weight Quick Start Guide applies all the principles of his best-selling book Racing Weight in a detailed set of weight-loss training plans. You will devote 4 to 8 weeks to starting a weight loss of 5, 10, or 20+ pounds. Lose weight quickly by following a schedule of high-intensity workouts and strength training as well as a menu of calorie-restricted, high-protein meals and snacks. Low-volume and high-volume plans make it possible for cyclists, runners, and triathletes with a wide range of experience to maintain their training levels. Replace fat with muscle while keeping your appetite in check.

The relationship between power output and body weight is everything in the sport of cycling. This relationship, known as the power-to-weight ratio, is the single best predictor of a cyclist’s race performance capacity. Power produced by the cyclist’s body moves the bike forward. The weight of the cyclist’s body resists forward movement. So the more a cyclist can increase his power output at any given weight and the more he can reduce his body weight without sacrificing power output, the better he can perform on the bike.

The same principle applies in running and other endurance sports. While it is not possible to accurately measure power output in these other sports, diferent measurements tell the same story. For example, VO2max, or the maximum rate of oxygen consumption, can be used as a rough proxy for power-to-weight ratio in runners. Just as bigger cyclists can generate more power than smaller ones, bigger runners can consume more oxygen (which drives muscle contractions and forward movement) than smaller ones. But VO2max as we know it is adjusted for body weight. So, while a 200-lb. jogger might have more absolute aerobic power than a 120-lb. elite marathoner, the latter is able to consume much more oxygen per kilogram of body mass. The elite marathoner’s VO2 max will be significantly higher, and that is the stat that matters for performance. VO2 max predicts running performance (and rowing performance, cross-country skiing performance, etc.) as well as power-to-weight ratio predicts cycling performance. There are two ways you can increase your VO2 max:

Thirty-four cyclists, separated into four groups, participated in the study. For 10 weeks, one group added twice-weekly sprint interval sessions to their training while maintaining their current body weight; a second group continued with their normal training while actively pursuing weight loss through dieting; a third group added sprint intervals and pursued weight loss; and a fourth “control” group continued with their normal training and maintained their current body weight.

The results were telling. Members of the sprint interval–training group improved their power-to-weight ratio by 10 percent, on average. They achieved this gain entirely through an increase in their power output, as their weight did not change. Members of the weight-loss group increased their power-to-weight ratio almost as much—by an average 9.3 percent. This gain was achieved entirely through weight loss (they lost 11 lbs. on average), as their power output did not change.

As you might expect, members of the control group experienced no gain in power, no weight loss, and thus no change in power-to-weight ratio. But what might surprise you is that members of the combined sprint interval–training and weight-loss group also did not improve their power-to-weight ratio over the 10-week study period. The problem for this group was that, while they did lose a significant amount of weight through dietary restriction, this very restriction seemed to prevent them from gaining any power through sprint interval training. More specifically, suggested the authors of the study, inadequate protein intake kept their muscles from adapting to the stress imposed by the sprints.

The general conclusion the authors drew from the results of their investigation was that cyclists seeking to enhance their power-to-weight ratio should either add sprint intervals to their training or lose weight, but should not do both simultaneously. This conclusion is consistent with the observation of many other exercise scientists, coaches, and athletes that the aggressive pursuit of weight loss through dietary restriction is not compatible with aggressive training for maximum performance. Maximum weight loss and maximum performance cannot be equal priorities for an endurance athlete at any given time.

The truth of this point becomes even clearer when you consider the fastest possible way to safely lose weight: the very-low-calorie diet (VLCD). Medical professionals sometimes place severely obese patients on a diet of just 800 calories per day when the health effects of their body weight are considered to constitute an emergency requiring immediate and drastic correction. A modest 800 calories per day is about the minimum amount of food energy a severely obese person requires to keep all of his or her vital organs functioning properly. On a VLCD a patient can expect to lose three to five pounds per week. It is the fastest possible way to safely lose weight.

Paperback. 2-color interior with charts and tables throughout.